One friend, two "un-inhabitable hosts" and how bad things happen to good people.

We all got our folks.  And you know what, bad shit happens to good folks.  Its just a part of life.  And sometimes, we can help our folks.  So here's the basic deal:

My homeboy Jesse felt ill.  Jesse is like me.  In fact, we joke about it.  Talking about "un-inhabitable host" as in, we take such shitty care of ourselves that even sickness can't live in our toxic systems.
Well, turns out that's not true.

Jesse fell ill a little bit ago.  Not bad.  Just a cold or whatever.  Until he felt fucked up and his godsend of a woman said:  "Jesse, we need to go to the hospital."

So Jesse finds his ass to the hospital.  While he's getting checked in and doing all the paperwork, the illness got the better of him and he seized.  I mean BAD.  So bad that while he seized, his muscled convulsed so badly that his muscles tore his shoulder out of its own socket.  On top of the dislocated shoulder, Jesse actually tore his own rotator cuff during the seizure.  Honestly, I didn't know he was that strong.  Frankly, I don't think Jesse did either.

Well, it gets worse.

During the seizure, like my own system, Jesse's body decided enough is enough and started doing its best to expel the bad shit within.  Meaning, he began vomiting.  But you need to understand.  This isn't the normal puke you may have after a night of heavy drinking.  No. This is me and Jesse Puke.  Like, REAL bad shit.  Like melts plastic type shit.

So, Jesse is in seizure, his already ripped his shoulder out of its socket, and torn his rotator cuff.  Enough right? Hardly man.  My boy inhaled his own plastic-melting toxic barf and as a result got him a serious case of pneumonia.

So rad.  Jack's friend is fucked beyond belief.

Well, luckily, we both live in America.  Where they will gladly help you, then send you a crazy bill with interest.  And when I say crazy, I mean cray-cray-x-ray.  It's fucked.
You probably  have a friend who has had similar situations (albeit with different injuries/illnesses).

Anyhow, some friends here in Portland put together some really cool shit.  Like an entire tattoo shop doing rad tattoos and giving EVERY LAST DIME to Jesse. Because frankly, the shit is ridiculous. 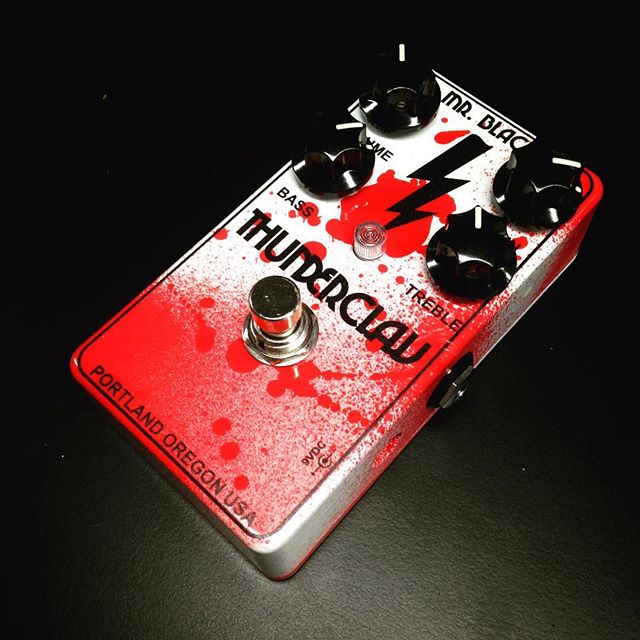 These are my folks.  You have em too.  Here's the deal:

This 1 of 1 ThunderClaw is now available on eBay. Straight up: $0.99 opening bid, no reserve auction.  EVERY LAST PENNY goes to Jesse.  Its just like that.  Jesse is shipping this thing, ANYWHERE in the world.  And we at Mr. Black are backing it.  100%.  Standard warranty, standard deal, except that it is a special pedal.  Like, this is for my friend.

So, do the thing.

And you know what?  Its for an even radder-er cause.  And that's radder-er.

We all take a turn.  I truly hope when its my time, my friends are there for me as well.  Its really all we can hope for.  That and maybe a breath when we awake tomorrow.

Get stoked.  Get wrecked.  Be good.

From me to you:

Mr. Black saying be good and cherish the breath you just took.  It didn't give you pneumonia.